CastleCourt Shopping Centre in Belfast has experienced a flurry of activity in recent months with the opening of over 15 new shops according to letting agents, Osborne King. The centre enjoyed a particularly busy trading period over Christmas with average footfall up by 4% compared to figures for the previous year exceeding all expectations. Reports also indicate that the amount of time spent by visitors to the centre also increased, helped in part by an influx of shoppers from the Republic of Ireland.

Leading fashion retailer, Republic, will be making its debut on the Irish retailing scene when it opens its first store at CastleCourt during early spring. The company has an extensive chain of 97 stores across Great Britain and stocks an eclectic mix of top fashion brands aimed mainly but not exclusively at the 16-25 year old market. Occupying the former Zavvi store, which fronts onto Royal Avenue, the new Republic outlet will comprise 10,000 sq ft of space stocking high fashion menswear and womenswear 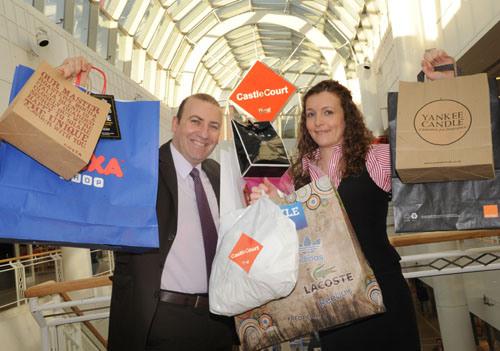 In late 2009 the centre owners also invested substantial funds on the reconfiguration and construction of the upper mall, this has significantly improved the circulation around the mall and has facilitated a further new letting to Costa Coffee in a vibrant open plan central mall café.

Commenting on recent lettings at CastleCourt, Alana Simpson from Osborne King's Retail division said:"Market conditions have been extremely difficult everywhere during the past eighteen months; however the reality is that retail is a highly dynamic business that will always seek to adapt to the prevailing economic climate. CastleCourt is a prime example of this in that it has adapted its retail offer to suit the needs of its customers through introducing a selection of value-type retailers whilst maintaining the quality and variety of its tenant line-up overall."

She continued:"Visitor numbers have remained high; in fact, the centre had over 15 million visitors last year, who are undoubtedly attracted by the diversity and range of goods and services available at CastleCourt, which is unrivalled elsewhere in the city centre."

Paul McMahon representing Castle Court's owners, Westfield Group, added:"We continue to look for opportunities in the marketplace which will enable CastleCourt to meet the demands of our loyal customer base. The retail offer in the centre has been significantly strengthened in the past year and the addition of Republic will be a great boost to the 2010 offer."