Osborne King And Ni Science Park Have Formula For Success

Limited space is available for rental within the first of three new buildings under construction at The Northern Ireland Science Park according to joint letting agents, Osborne King and CB Richard Ellis Over 80% of Building One, The Concourse, comprising circa 50,000 sq ft of high-specification office space, has been let to a number of companies including Novosco, an all-Ireland IT infrastructure specialist; Fidessa group plc, a leading financial markets software and services company and Bytemobile, a multi-national corporation at the forefront of mobile technology. At the moment, only c 10,500 sq ft of office accommodation is left available for rental on either a multi-occupancy or single occupancy basis, and once fully occupied, Building One has the capacity to accommodate up to 450 employees. 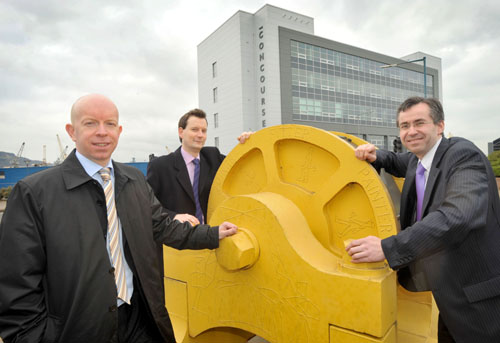 Future development plans for the Concourse include the construction of two additional buildings, which will be linked to Building One. It is understood that this construction work may begin towards the end of this year with completion scheduled for 2010 bringing the total amount of new office space created within the Concourse complex to approximately 170,000 sq ft.

Commenting on this latest phase of development, Gareth McGimpsey from Osborne King remarked: “Since its inception, the Northern Ireland Science Park has established a solid reputation for encouraging and supporting the start up, incubation and acceleration of innovation-led, knowledge-based businesses. NISP is one of the best serviced locations in Northern Ireland with regard to issues such as connectivity, physical design, flexible accommodation and general infrastructure. From a property perspective, it is most encouraging to note that despite immensely challenging economic conditions, NISP remains an extremely attractive location appealing equally to both small and medium-sized companies as well as multinational, globally based organisations.”

First mooted as a business concept ten years ago, the Northern Ireland Science Park now houses 40 high-tech companies employing 1500 people and continues to attract new innovative, market-leading indigenous and global companies across a broad range of technologies. It is believed that around half of NISP’s current tenants have experienced 100% growth since either starting up or re-locating their businesses within the Science Park.