Local businessman, Neil Murphy, has acquired the store on a franchise basis and has put his own personal stamp on a highly successful format that has been established across southeast England. The Belfast store incorporates features such as an industrial-type ceiling and exposed brick work that complement the dark wood flooring, leather sofas and vibrating massage chairs common to existing Jacks of London stores. Commenting on his decision to open a Jacks of London store in Belfast, Neil Murphy said: "Currently in Belfast you have the choice of either basic barbershops or an overpriced salon, which many men find an uncomfortable experience. Jacks will introduce an entirely fresh approach to male grooming in Belfast from the moment customers walk in the door – it is a unique experience for men and they really won’t find anything like it in the city."

Andrew Nixon who was involved in letting the unit to Jacks also remarked: "It’s always encouraging to see new stores opening for business especially since this has been a most challenging year for the retail trade generally. That said, there will always be a demand for high-quality premises in a prime retail pitch and Jacks has certainly chosen well in terms of its first store location within the city centre, which is reflected in the striking design and layout of the store. Neil and his team are also offering a radically different concept in terms of men’s hairdressing and personal grooming, which both enriches and broadens the local retail offer. Belfast needs to attract new retail brands such as Jacks if it is to position itself as a dynamic and cosmopolitan city able to compete effectively with our regional counterparts." 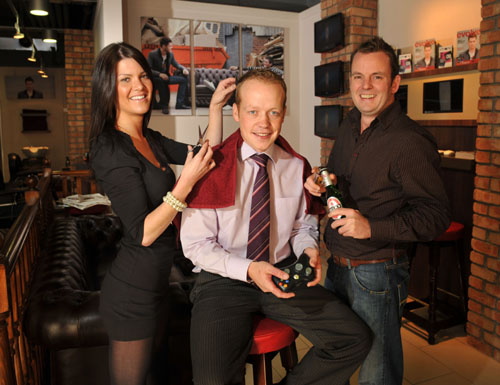 Aiming to attract a diverse range of customers, Jacks operates a student discount scheme on certain days in addition to a corporate loyalty card scheme offering 20% discount to registered members from Mondays to Fridays while holders of the company’s "Smoothie" card are entitled to have every fifth traditional cutthroat shave for half the full price. Employing five full-time staff at present, the store is open seven days a week, 8.00 am to 8.00 pm on weekdays and operates a live "Queue Watch" webcam enabling customers to check on how busy it is before visiting (www.jacksoflondon.co.uk).