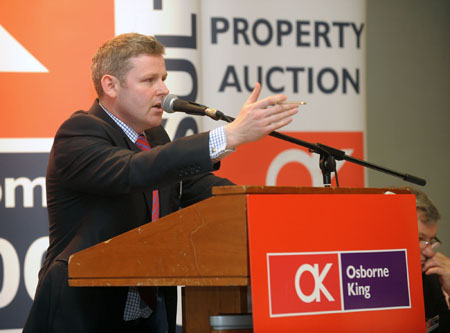 Property auctions are now a widely acceptable form of asset disposal although many still believe that a sale by auction means a “fire sale”. In other parts of the UK, auctions are an integral part of the property landscape with hundreds of property auctions held each year. Admittedly, some lots are sold as a last resort, however, few would dispute that an auction is an efficient method of sale compared to more orthodox means.

It is over three years since we decided to re-engage with auctions when transactional activity in the general property market was at its weakest level for many years. At the time, this seemed either a brave or a foolhardy thing to do depending on one’s viewpoint. Seven auctions later, £11.5 million worth of sales and an average sales success rate of 92%, our decision to re-launch the auction seems to have paid off with many others following suit!

In the current market, prices are at a five-year low thus presenting buyers with extremely attractive investment or owner/occupier opportunities. Our sales analysis reveals that 85% of the lots that we sold at auction were below the £100,000 threshold, which would have been inconceivable at the height of the property boom. Unsurprisingly, the vast majority of properties come through the receivership/administration channel although the number of private clients putting properties up for auction has increased noticeably in our recent auctions and accounts now for almost a quarter of vendors. This suggests that private clients now regard auctions as an efficient and effective means of achieving sales, particularly when their properties have failed to sell through methods that are more traditional.

And it stands to reason: for example, with a sale by private treaty, the period from first marketing a property to agreeing terms can be protracted. Even if the vendor and purchaser have agreed terms, more often than not, difficulties such as inability to secure funding, issues regarding rights of way and so forth can emerge jeopardising the deal. All too often, prices are “chipped” or the purchaser simply walks away from the deal leading to a protracted marketing process.

Contrast this with the auction scenario where buyers, assuming that their bids are successful on the day, will be able to sign a binding contract secure in the knowledge that the property will legally be theirs within four weeks. Obviously, prospective buyers should carry out all due diligence relating to each property
in advance of the auction.

The buyer profile has also altered radically with today’s bidder likely to be unknown to the auction house in stark contrast to the boom period. Currently, the strongest market is the domestic housing market with many buyers acquiring houses at affordable levels within the exemption of stamp duty bracket. The growing demand for rented property is also attracting people back into the buy-to-let market whilst we are seeing something of resurgence in demand for residential development land, particularly within Greater Belfast. Commercial property and commercial development land, however, are much harder to sell due to limited end-use demand, rates liability, lack of development finance and associated fixed holding costs.

Across the UK, auctions are performing well with approximately 60,000 lots offered for sale in 2012 realising sales in the region of £3.5 billion (EI Group) and sales have been rising year on year. Locally, there has been an uplift of 50% in funds raised in the second quarter of 2013 compared to the same period in 2012. As we prepare for our final auction of the year next month, we expect that the trend for auctions locally will continue to grow. Even though the residential market is stabilising and even increasing albeit modestly, the commercial property market will take longer to stabilise, as its recovery is highly dependent upon the availability of finance.

Encouragingly, we are finally seeing signs of a general recovery although on an extremely gradual, some would say torturously slow, upwards trajectory and, more importantly, signs that it is definitely back to basics for buyers as they invest in property for the medium to long-term whether at auction or through other means. Surely, recent history is unlikely to repeat itself. In sharp contrast to the boom years, purchasers are adopting an extremely shrewd approach regarding how and where they invest their cash. Details of Osborne King’s auctions are available online at www.osborneking.com/auction