Osborne King is preparing to hold its second auction of the year on Friday 20th of June at the Holiday Inn, Ormeau Avenue, Belfast. Promising to be the company’s biggest and best auction to date since re-engaging with the process in 2011, there are 70 lots on offer with a combined overall maximum reserve value of c. £5.5 million.

The auction catalogue features an even split of development land, residential and commercial property. The largest lot in terms of value is an industrial investment opportunity in Newtownards, which has a maximum reserve price of £850,000, putting it closer to pre-2008 lot size levels. At the lowest end of the spectrum, prospective buyers will have the opportunity to bid on a development opportunity near to Omagh, Co. Tyrone, which has a maximum reserve price of £3,000.

A large proportion of the properties on offer are residential and guaranteed to appeal to first-time buyers or buy-to-let investors, however, the auction listings also feature a significant amount of commercial property which is likely to attract private investors and developers. For example, a prime industrial investment opportunity on the Campsie Industrial Estate, Eglinton, Co. Londonderry is included in the auction listings with a maximum reserve price of £225,000 while a mixed-use retail and office investment property in Limavady is featured with a maximum reserve of £155,000. Meanwhile, operators within the hospitality may be interested in acquiring The Lough Erne Hotel in Kesh, Co. Fermanagh which has a maximum reserve price of £195,000. 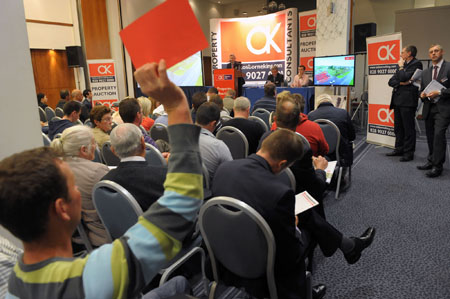 From townhouses to offices, farmland to warehouses, there is something for everyone as Mark Carron, Head of Osborne King’s auction team explains, “Since re-entering the market almost three years ago, we have seen a steady growth in the number of properties put forward for auction, the competition has followed suit and it’s fair to say that auctions are now an established feature of the property landscape. At the same time, the value in average sales lots has increased from around £50,000 to £80,000, average sales receipts have grown while the quality of lots on offer has improved significantly. There’s a strong degree of interest in this auction and we are handling a lot of enquiries from interested purchasers, and in some cases, have received offers, which is very positive. Further we would expect a number of lots that will be sold prior to the auction so buyers should keep in touch with us to avoid disappointment. Confidence is returning slowly but surely to the property market and this is reflected in rising values, competitive bidding, quicker sale completions and better quality of stock.”

Full details of the properties for sale are available on Osborne King’s website - www.osborneking.com/auction or by telephoning 028 90270000.