CAN YOU AFFORD NOT TO CONTACT THE SPECIALISTS REGARDING YOUR 2015 RATES REVALUATION? 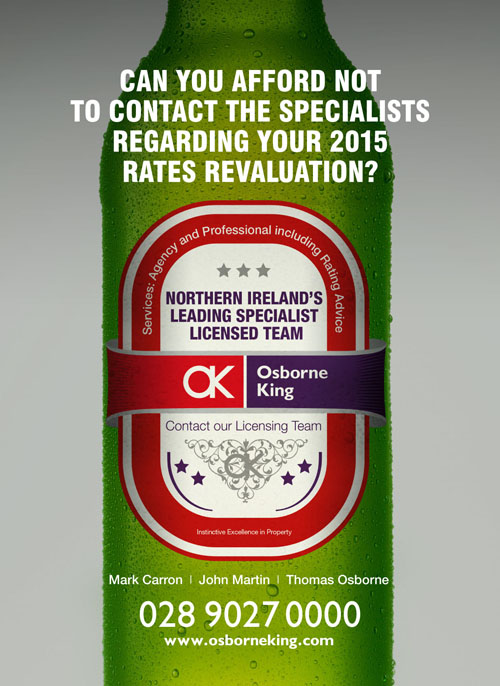 Since early 2013, Land and Property Services (LPS), the government department responsible for overseeing our rates bills, has been collating information and updating valuations of the 73,000 non-domestic properties throughout Northern Ireland.  The new rating revaluation for licensed premises and all non-domestic property will take effect from 1st April 2015 and will be based on the estimated rental value of your property as at the 1st April 2013.  Current valuations are out of date as they are based on rental values at April 2001.  Furthermore the rateable value of for public houses and hotels is based on their trading accounts otherwise known as the Fair Maintainable Trade (FMT), as historically most public houses and hotels in Northern Ireland are owner-occupied thus providing little rental evidence to provide an adequate assessment basis.

Accordingly the profits method is considered an appropriate method for the valuation of public houses and hotels and a valuation scheme based on the adoption of various percentages to the FMT has been developed.  This FMT represents the annual trade (net of VAT) considered to be maintainable as at 1st April 2013 having regard to the physical nature of the property and its location on the assumption that the business is competently operated. The FMT also takes account of types of income generators including alcohol, food, off-sales, door money, accommodation and other sources of income from your business.  Each of the above income streams require varying weighting to take account of the levels of profitability of these incomes streams. Once your FMT is established and the weighting applied other arguments can be considered reflecting factors which affect the notional rental value of the premises.  All these factors are a matter of judgment but the outcome will directly influence your rates liability for years to come.

Once the rateable value is established, a multiplier (the rate in the pound) is applied to this figure and that calculates your actual annual liability.  The main objective of the revaluation is to equitably reallocate the rates burden across all non-domestic properties in Northern Ireland.  Between 2001 and 2013 changes in the fortunes of locations and customer spending pattern mean that some locations and types of licensed premises have fared better than others.  There will be winners and losers following the revaluation.

In general terms we predict reduced valuations/liability for smaller and rural licensed premises and higher valuations/liability for super pubs and recently trendy locations.  Regardless of whether you are a winner or loser you will want to make sure you are not paying any more rates than you have to.  A further incentive to keeping your valuation as low as possible is the fact Sky TV subscriptions are directly linked to the rateable value.

Although the new valuations will not take effect until April 2015 draft valuations will be published on time later this month.  Our advice is to engage an experienced rating surveyor, someone with a strong background in the agency of licensed premises, to review the valuation and take action as appropriate.  The legislation allows for a three stage appeal process but be warned that valuations can go up as well as down on appeal so it is important to have proper advice before taking any action.  Osborne King is Northern Ireland’s largest independent commercial property company and has renowned specialism in the licensed premises and rating consultancy sectors.  We are ideally placed to offer the advice you require to mitigate your rates liability as far as possible.